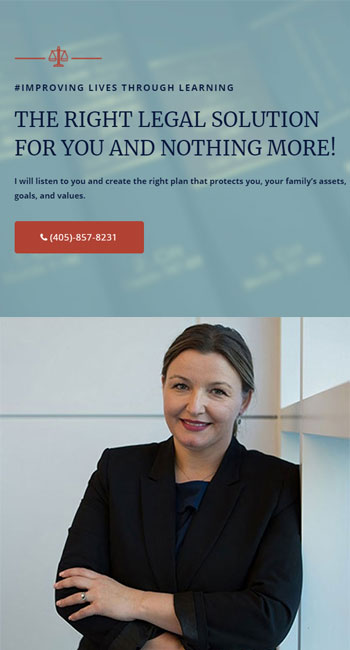 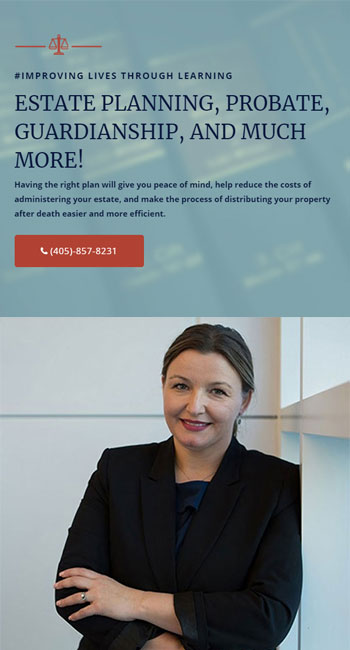 Mona fell in love with Estate Planning while still in law school and she pursued this interest by focusing her course load and volunteering activities on this specific area. Since graduating law school, Mona’s practice of law centered exclusively on Estate Planning, Probate and related areas. Mona’s passion is meeting with people, listening to their needs, and advising them on a course of action suitable for their circumstances, and nothing more.

In 2018, Mona became a Big Sister for an amazing Little Sister through the Big Brother Big Sister Organization. Mona is a proud Rotarian, a board member for Fostering Futures and a very active participant in the community. The commitment to both organizations is very rewarding and beneficial for everyone involved. As such, Mona encourages everyone to research the countless volunteering opportunities in the area, because they truly make a difference in the community.

Having worked in other countries and with people from all over the world, Mona understands that every person is unique and that the process of discussing delicate legal needs may sometimes require added thoughtfulness and understanding. Mona’s love of people and of her profession make her the right Estate Planning attorney for everyone.

An Estate Plan can include a Will, Durable Powers of Attorney for health care and finances, an Advance Health Care Directive (sometimes called a Living Will) and possibly a Revocable or Irrevocable Living Trust.

Oil and gas production in Oklahoma seems to be somewhat cyclical and regional. As such, unless there is current production and/or Oil and Gas Leases were signed recently, owners of Oklahoma mineral interests sometimes ‘forget’ about them.

Probate is the legal process by which the court system distributes your property, pays your debts, and settles disputes after your death. During probate, the court supervises the processes that transfer legal title of property from the estate of the person who has died (the “Decedent”) to his or her beneficiaries.

Guardianship administration law is designed to protect the welfare and rights of individuals who are not capable of handling their own affairs. A Guardian is a person or agency appointed by the Court who is designated to act on behalf of a minor child, or on behalf of someone who has been, or is about to be, declared incapacitated.

We are here to help you with all of your Estate Planning needs.

I am very pleased with the professionalism, personal attention to detail, patience and continuing follow-up that Mona has provided. Estate planning, and the like, is more than a business transaction, it's definitely a long-term relationship. Highly recommend!

I talked to Mona Guziar at Unity Legal Services several times about the usual concerns that come with having a minor child and Mona explained everything to me in manner that made sense and made me feel prepared for the future! Thank you so much for all your help.

Mona was able to explain so many different aspects of estate planning in a simple and professional way. She was patient and answered every question. There was a group of 4 of us who spent over an hour discussing all the different ways to plan for the inevitable. I'm looking forward to attending her seminars.

I highly recommend Mona for your Estate Planning needs. She explained everything very well and I felt confident in her skills and knowledge to do exactly what my family needed.

Unity Legal Services did it very professional job for our family. We highly recommend anyone in need of setting up their trust along with their wills use this service. We were extremely pleased with the process and the end result totally met our needs.

Mona helped me understand the importance of estate planning. She put it in simple terms that I can easily follow. I had no idea how valuable having real property in a trust is until I met Mona. Please use her and get your ducks in a row now, before its too late.

Monica “Mona” Guziar was born in Romania, lived in England for two years, and came to the United States over fifteen years ago. In the United States, Mona lived in Florida, Texas and settled in Norman in 2013. As a Norman resident, Mona and her family have fallen in love with the amazing community, its caring people, and the lack of traffic.

Mona received her Juris Doctorate from the University of Oklahoma in 2017. While in law school, Mona was recognized for her academic accomplishments during law school by being listed on the Dean’s Honor Roll twice, but she is even more proud of the award won at the completion of the first year, the Outstanding 1-L Pro Bono Award.

During law school, Mona served as a Guardian Ad Litem in Deprived (DHS) cases through the OU Civil Clinic, volunteered with the Cleveland County DA’s office helping with the Deprived cases and was directly involved in courtroom proceedings. In the summer of 2015, Mona became a Certified Mediator through the Early Settlement Program sponsored by the Oklahoma Supreme Court. As a mediator, Mona has successfully mediated numerous small claims at the Cleveland County Courthouse.